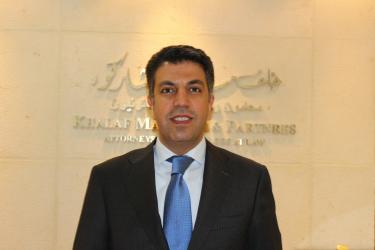 Ahmad Masa'deh is the managing partner of our firm.  He specialises in all international trade and foreign direct investment matters, particularly WTO questions such as those resulting from the liberalisation of trade in goods and services as a result of the provisions of GATT, GATS, TRIMS, and TRIPS. Maintaining an extensive domestic legal experience, Dr. Masa'deh is also well exposed to Western legal systems having worked in London with English law firms and being awarded a Certificate in the US Legal System from Georgetown Law Center, Washington D.C., an LL.M. degree from the University of Virginia, Charlottesville, USA, and a Ph.D. degree in investment and WTO law from King's College, University of London. Dr. Masa'deh joined the firm in 1992, and became a partner in 2000. In the year 2003, he became managing partner. He received his training at Khalaf Masa'deh & Partners where he prepared, documented and argued cases before all kinds of Jordanian courts. In 1999, he attended a work placement with the English law firm of Berrymans Lace Mawer. He thereafter worked as a WTO Specialist with the international law firm of Rowe & Maw in London (today Mayor Brown LLP) before rejoining Khalaf Masa'deh & partners in May 2000.

Examples of recent transactions in which he has been involved include:

In addition to his practice, Dr. Masa'deh was an Assitant Professor of International Business Law at the School of Law, University of Jordan, where he lectured on international trade law, corporate law, commercial law, and the law of bankrupcty.

Dr. Masa'deh is a member in a number of professional societies such as the Jordan Bar Association (since 1992); the World Trade Law Association, London (Member of Council); the British Institute of International and Comparative Law, London; the US/Jordan Legal Exchange Conference on Alternative Dispute Resolutions (ADR) mechanisms; the Society for Advanced Legal Studies, London; Arab Society for the protection of the Intellectual property; and the Jordanian Society for the protection of Intellectual Property Rights.

Ahmad Masa'deh is also a politician and international diplomat.  He served formerly as Minister of Public Sector Reform, Ambassador of Jordan to the EU, Belgium, Norway, Luxembourg, and NATO, and Secretary General of Union for the Mediterranean. Information on his remarkable political and diplomatic career can be found on www.ahmadmasadeh.net.